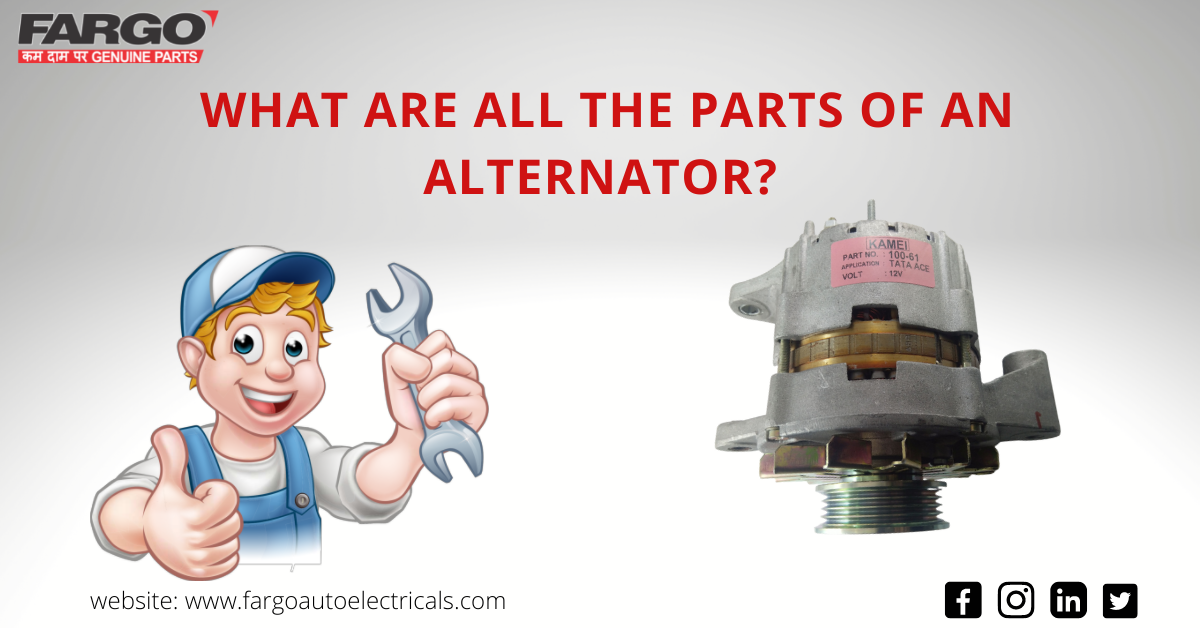 A very frequent question asked is, What are all the parts of an alternator?

A car alternator consists of several parts. The rotor is the main part, and it rotates to produce an output current. The rotor is connected to the engine via a drive belt system. The engine rotates the alternator at a speed that causes the battery to get charged.

What is an Alternator?

This auto electrical part is driven by the crankshaft as it converts the up-down movement into rotation. The piston moves up-down.

Where previously vehicles had separate drive belts from the crankshaft. Nowadays modern vehicles come with serpentine belts. This belt drives all the components of the crankshaft.

The alternator is mounted to a specific point on the engine using brackets.

One bracket is present as a fixed point. While others can be adjusted with a drive belt.

The major parts through which an alternator produces its power are the starter and rotator. They produce electromagnetism with each other’s relationship. You will read about what are all parts of an alternator in a while. But before you should look at the working of an alternator.

Basic Parts of an Alternator

The stator is an iron ring with coils of wire wound around it and serves as the body of the alternator.

There is an electric current formed when the starter produces a magnetic field in the alternator. The rotor is another key part of an alternator, which is made up of a shaft and pulley.

The rotor is a spinning electromagnet and is connected to the other parts by a drive belt system.

The alternator is connected to the engine’s battery with a belt and is typically mounted on brackets.

The diodes in this product convert AC to DC.  The current generated by the diodes is regulated by a voltage regulator, which controls the voltage.

How does an Alternator Work?

We all think that the battery is that auto electrical part that powers all the components of your vehicle. Like windshields, radios, headlights, or others. However, you are partially right and partially wrong. The major electricity is produced by an alternator instead of the battery.

The responsibility to produce electricity is on alternators as well as to recharge the battery of your vehicle. But how does mechanical energy convert into electrical energy?

Firstly, the production of electric current starts in the engine. As we read above, modern vehicles have alternators that are driven by a crankshaft. Whereas there were separate pulleys present in the crankshaft in old vehicles.

Inside the stator, the rotator of the tjis product starts spinning at high speed.

With this rotation, electricity is produced. As the rotator has a magnet inside, they pass the electricity to the wires of the stator. By this, a magnetic field is created inside it.

This magnetic field produces a voltage that is captured by the stator. Later, this generated power reaches the voltage regulator. Here, it regulates the level of energy distribution.  At last, the electricity is delivered to the vehicle.

What are All the Parts/Components of an Alternator?

There are a number of components or parts present. These all parts are combined together and work to provide the right amount of power to the vehicle.

In an alternator, the stator and rotator are electrical components.

The stator is there for holding fixed copper wire,  Whereas the rotator is a cylindrical piece that is surrounded by magnets and spins inside the stator.

The creation of electricity happens when the magnets of the rotator spin around the wires of the stator.

As soon as the alternator starts making the power, the voltage regulator present inside it starts overseeing it.

However, its main function is to monitor the level of voltage in the battery.

The voltage regulator also delivers the power to the rest of the vehicle.

As we read that all works and produces the major energy in the form of electricity. This process also involves the production of heat. This heat needs to be cooled down.

For this, among What are all the parts of an alternator, there is also a cooling fan.

This was the guide on What are all the parts of an Alternator? And How does it work? I hope you have found this guide useful and the information you were looking for on the internet.

An alternator is an essential component in a vehicle. Your vehicle should have a proper and effective working alternator in it. Do you need an alternator or its part for your car?

Well, check out a wide range of auto-electrical parts including alternators on FARGO.

Here, you will get a budget-friendly alternator assembly and all the alternator parts. These products come in high quality from OEMs like UNO MINDA, BOSCH, Valeo, etc.

So, make sure to check out the product list!

How to Take Measurement with Meters & Gauges?