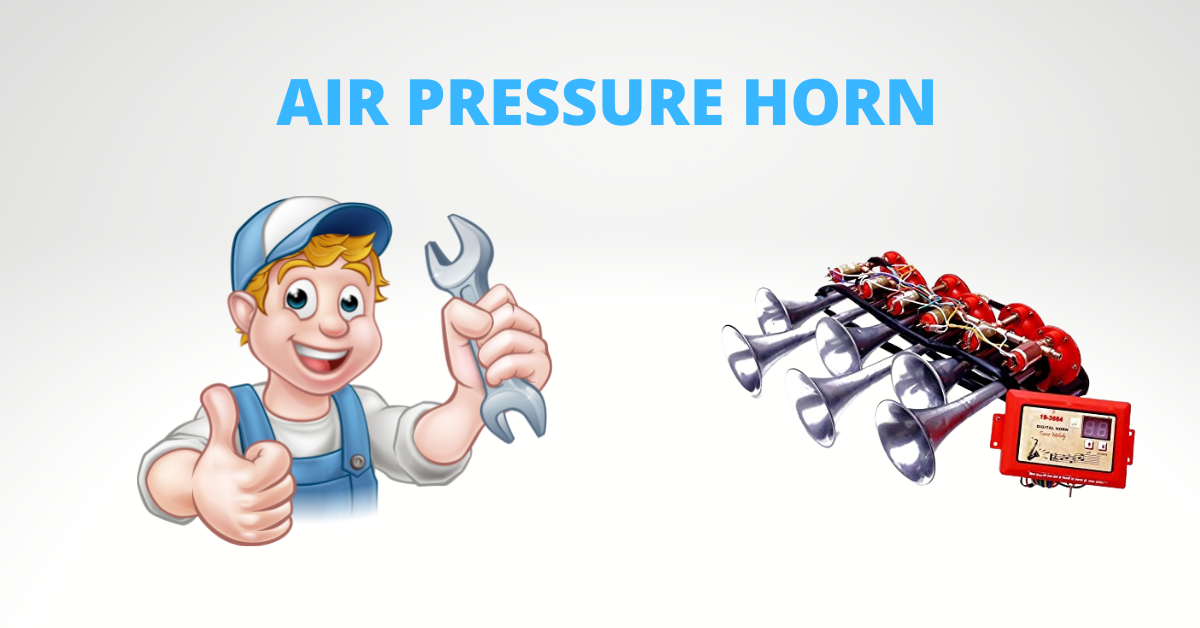 Pneumatic air horns, which are most commonly found in fire engines, trains, and large semi-trucks, produce loud noises by utilizing pressurized air. It is primarily used as a warning sign. This electronic horn is a serious piece of equipment. You’ve probably heard an automobile horn or a fire truck air horn during an emergency. Then you will know how loud the air pressure horn is.

Onboard air systems are installed to provide a consistent flow of air throughout your vehicle. This article will teach you everything you need to know about the air pressure horn and how it works.

How Does an Air Pressure Horn Work?

Air horns, so named because they produce sound by forcing air through a collection of trumpet-like horns, are true to their name in that they produce sound by forcing air through the horns. Due to the high resistance of an air horn, powerful electric air compressors can produce a large amount of air at a high pounds-per-square-inch (PSI) pressure. This air is routed through tubes to the horns, where it is eventually converted into the source of the sound.

Of course, the compressors that power air horns are not always on; if they were, the horns would always be making noise. Instead, the compressors are connected to a power source via a simple on/off toggle switch, similar to the one used to turn on a light or roll up a power window, thereby interrupting the flow of electricity. When the switch is turned to the “On” position, an electrical circuit is formed between the air compressor and its power source, causing the compressor to start and generate the air required to produce sound.

When the compressor is turned on and large amounts of airflow through the horns at very high pressure, the horns allow the air to quickly pass through and escape. As air passes through the horn, a metal (or, in common automotive use, plastic) diaphragm oscillates between open and closed positions. This vibration is carried to and magnified by the horn’s bell, which vibrates at the same frequency. The vibrations travel through the air and are eventually perceived as sound by the human ear. Because air horns are typically made up of a series of horns powered by one or more compressors, and because the entire horn vibrates to transfer powerful vibrations to the air, the sound produced by air horns is significantly louder than that produced by standard automotive horns.

What Effect Does an Air Pressure Horn Have on Your Onboard Air System?To fully comprehend how air pressure affects your onboard air system, you must first learn everything there is to know about air. Of course, you understand what air is, but do you understand what it is made of?

It is a mixture of various gaseous elements such as oxygen, carbon dioxide, nitrogen, and hydrogen, among others. When the number of these molecules in a given area grows, millions of collisions occur on that surface area. This is referred to as air pressure. A barometer is used to measure these collisions. Many of your vehicle’s systems rely on air pressure, which must be accurate for them to function properly. You won’t be able to go anywhere if your tyres are under-inflated. If your vehicle has a diesel engine, your turbo will generate a boost that will also increase the air pressure.

It is critical to understand the amount of pressure required by each system in your vehicle. This is similar to your onboard system. If it does not receive adequate pressure, the onboard air system becomes inoperable. As a result, maintaining proper air pressure is critical for your vehicle’s maintenance.

Once you have a vehicle with an onboard air system, you will never want to travel without it because it comes in handy during low air pressure emergencies.

You can find more about these brands by visiting our site. Our products are also available on Amazon, Flipkart, and many e-commerce sites. So, go check them out and find the best air pressure horn as per your needs.

Types of Relays and Flashers with installation